Shi-Fu Moffett is Chief Instructor of Lung Ch’uan Fa Kung Fu & Tai Chi Ch’uan, a Senior Instructor Trainer of the military combatives course that he created, F.I.E.R.C.E. Teacher Training, and has over 40 years of experience in the martial arts. In 2006, he achieved his 9th Higher Level Black Sash, under Ch’uan Fa Grandmaster Steve Clark (see below. Starting Kung Fu in high school, and adding Tae Kwon Do and Karate training, he joined the U.S. Army for weapons-based training through the infantry. After his active duty, he started his college years, entered the Army National Guard in a depot level aviation maintenance facility, and created a sanctioned Kung-Fu club at UCONN. While attending National College in the Chicago area in the 80’s, he was a student of Gm. Hsu Fun Yuen in Tai Chi Ch’uan and Shaolin Kung Fu and created a Soft Style Kung Fu club on campus. After leaving the Chicagoland area in the mid 90’s he moved to the Winston-Salem area of North Carolina. Through his work at the local YMCA, he met his now senior student, Bryan Grayson, who along with other Piedmont Bible College students, became the core of the Dragon’s Fist school he started and is still running there today. Shi-Fu has trained with his present teacher Gm. Steve Clark (Lao Shifu) since the late 90’s after meeting him at the CACMA events in North Carolina. In addition, he has attended numerous seminars by instructors of other styles to supplement and strengthen the already versatile dragon styled techniques. He draws from his diverse training to improve his own skills and provide well rounded instruction to his students. See the “Meet the Instructors” page for more information on his present classes and his Senior Students, many now teachers, senior instructors, and instructors-in-training.

Lao Shifu is retired from the U.S. Air Force, and the U.S. Civil Service, and now serves as Senior Security Specialist at a Wisconsin Casino Resort.

Lao Shifu writes an ongoing column called “Review for Tonight” and offers insights into many aspects of martial arts and asian culture, including “Wu-de” – the Chinese term for acknowledging and maintaining one’s honor and conduct and courtesies. There are many reasons why it is popular to cultivate strength and power in the martial arts. There are just as many or more reasons to seek temperance and control of one’s action when one has the nature or physical capacity to harm or hurt others, even in the name of self-protection or self-defense.

Lao Shifu teaches that as one’s fighting capabilites grow, one’s spirit and mindset also needs to be trained to learn to utilize the acts of diplomacy and communication as first steps in any conflict or confrontation. Although one has the personal power to commit and utilize violent actions, any physical responses should be used judiciously as last resorts in a “force continuum”. Along with the powerful fighting capabilities, as one trains in the martial arts one learns to adopt stronger self-control and seeks to utilize an outlook of cooperation and camaraderie and utilize tools of force sparingly. 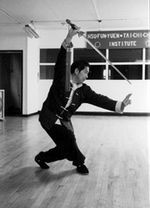 Grandmaster Hsu Fun Yuen was a student of Chen Man Ching and an inspirational teacher of Shi-Fu Doug and hundreds of others. See the links below for further information on Gm, Hsu’s chosen successor, Shi-Fu Elizabeth Wenscott.